I’m pretty sure that socially and politically, 2017 was a dumpster fire of current events for almost everyone. An optimist would argue that the hardships of the year, like the purging of Hollywood sexual predators, and fight against confederate civil war memorials are necessary for progress to occur. However, those optimists are still tongue-tied when it comes to explaining the silver lining of a Trump presidency. I often wondered if he was the worst president in history. Although I knew in my heart that the answer was undoubtable ‘Yes’, but the biggest confirmation to me that he was the most useless, inept human to ever take office was watching him fight with LaVar Ball on Twitter at 5am. 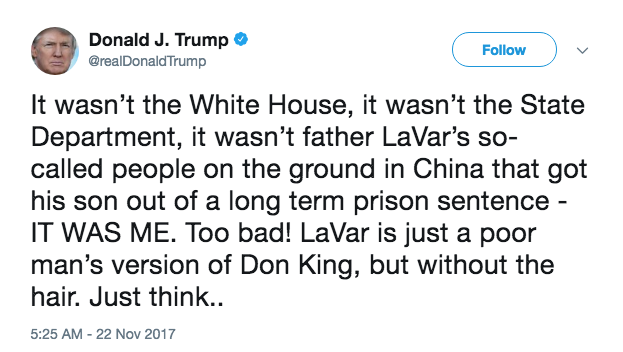 Everything from the Equifax security breach, regular mass shooting occurrences, the Grenfell tower fire in London, and Ma$e coming out of retirement to make a diss record against Cam’ron, all of it has exhausted me. Not to mention having to watch the New York City Transit System chip away at my happiness and quality of life.

We all need therapy, but with the way our health care system is set up…

So in the spirit of trying to find the glimmer of light in a very dark world. I did watch one thing flourish this past year. The appearance of more people of color on major magazine covers. And boy did they show out! 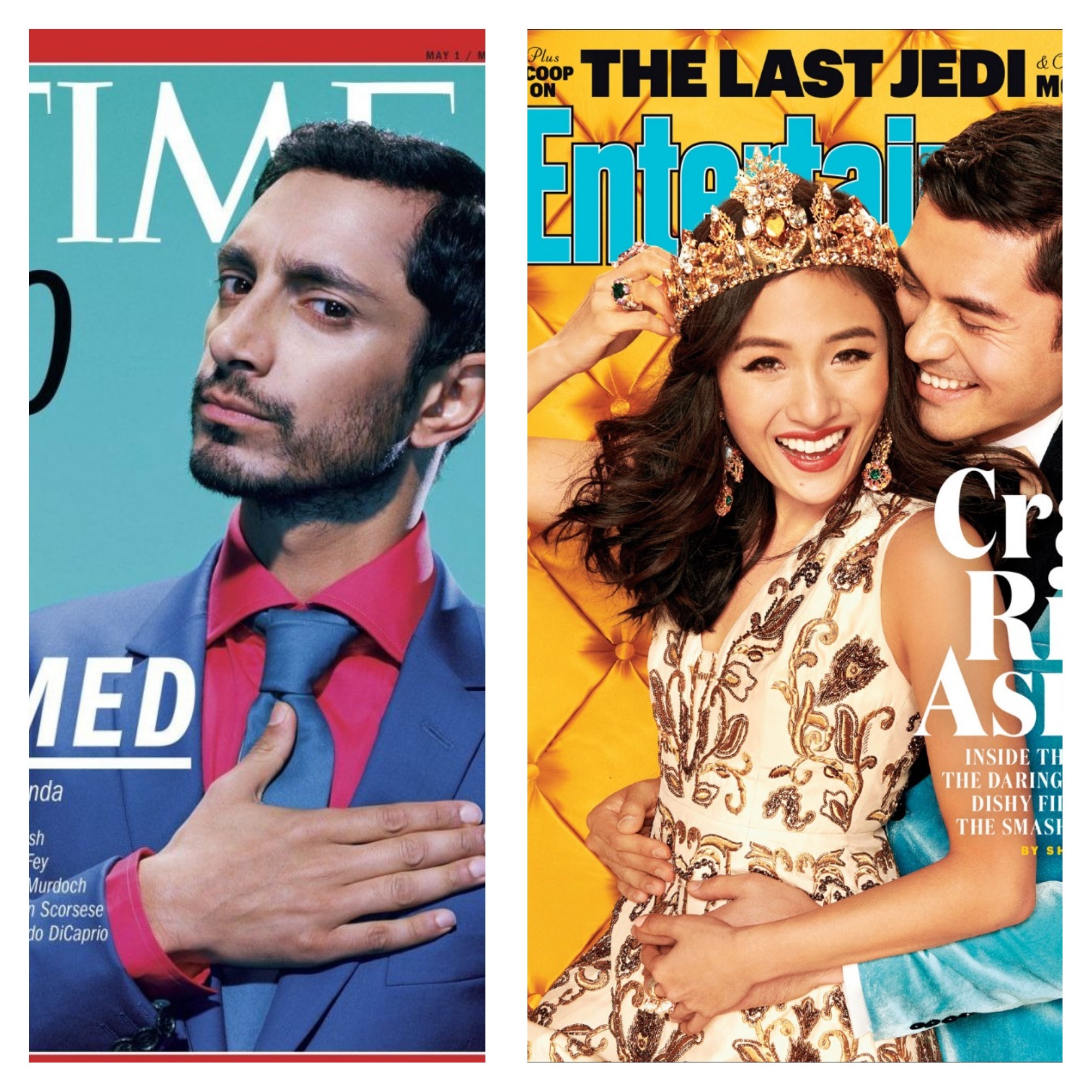 In the past few years, Hollywood and the media in general, has been called out over their lack of diversity. While the system has been slow moving to act on tearing down the structure that places the same 20 white actors in an elite, exclusive circle with the most media coverage. Magazines seem to be the one medium that are making visual leaps towards inclusion.

Not to say that having an Asian, Black, Latin, or Native celeb on the cover of your magazine once is some big great civil rights accomplishment, but representation is extremely important. For a South Asian kid in grocery store, watching Riz Ahmed be excellent on the cover of Time magazine is a reminder that barriers can be knocked down.

It’s not just the inclusion of more people of color on the covers of these publications that’s important. It was how well each cover was executed artistically. They didn’t do the usual lightening of the skin tone in post.

Nor did they put us in make-up done by a professional MUA with no experience in handling melanin-rich tones. Every single cover, each celebrity looked iconic.

I have spent more money on magazines this year than I ever have in my life. Each new cover I saw was an image of cultural swag that I wanted to collect for my kids to look through. The way I did with my mom’s old issues of Vibe magazine from the 90’s.

Although there were so many highlights in terms of the best magazine covers of 2017 featuring people of color. I do have a few favorites.

Princess Ri had three different covers of Vogue Paris, and three different U.S. Elle Magazine covers. All in promotion of both her Fenty Beauty Line and Fenty clothing collab with Puma. Rihanna had a banner year outside of music, but also had one of the biggest songs of summer with the Santana inspired ‘Wild Thoughts’. 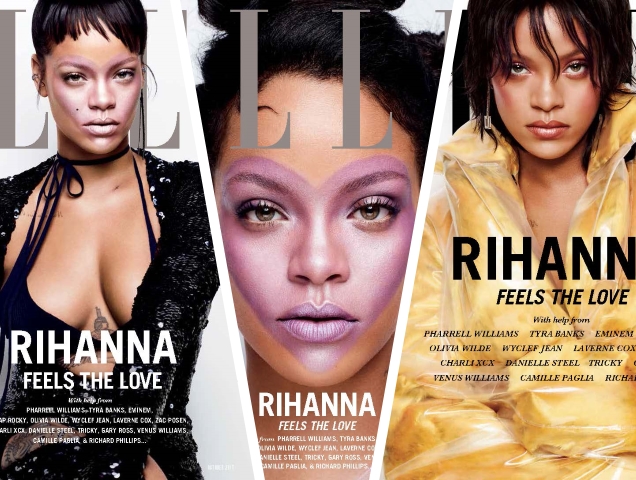 GQ Magazine, in my opinion did the best of being inclusive who they featured on their covers out of all the mainstream, magazines. Not only did they produce the iconic Colin Kaepernick, Lebron James, and Mahershala Ali covers, but Chance The Rapper, John Boyega, The Weekend, and Kevein Durant all got their own GQ cover and editorial spread this year. 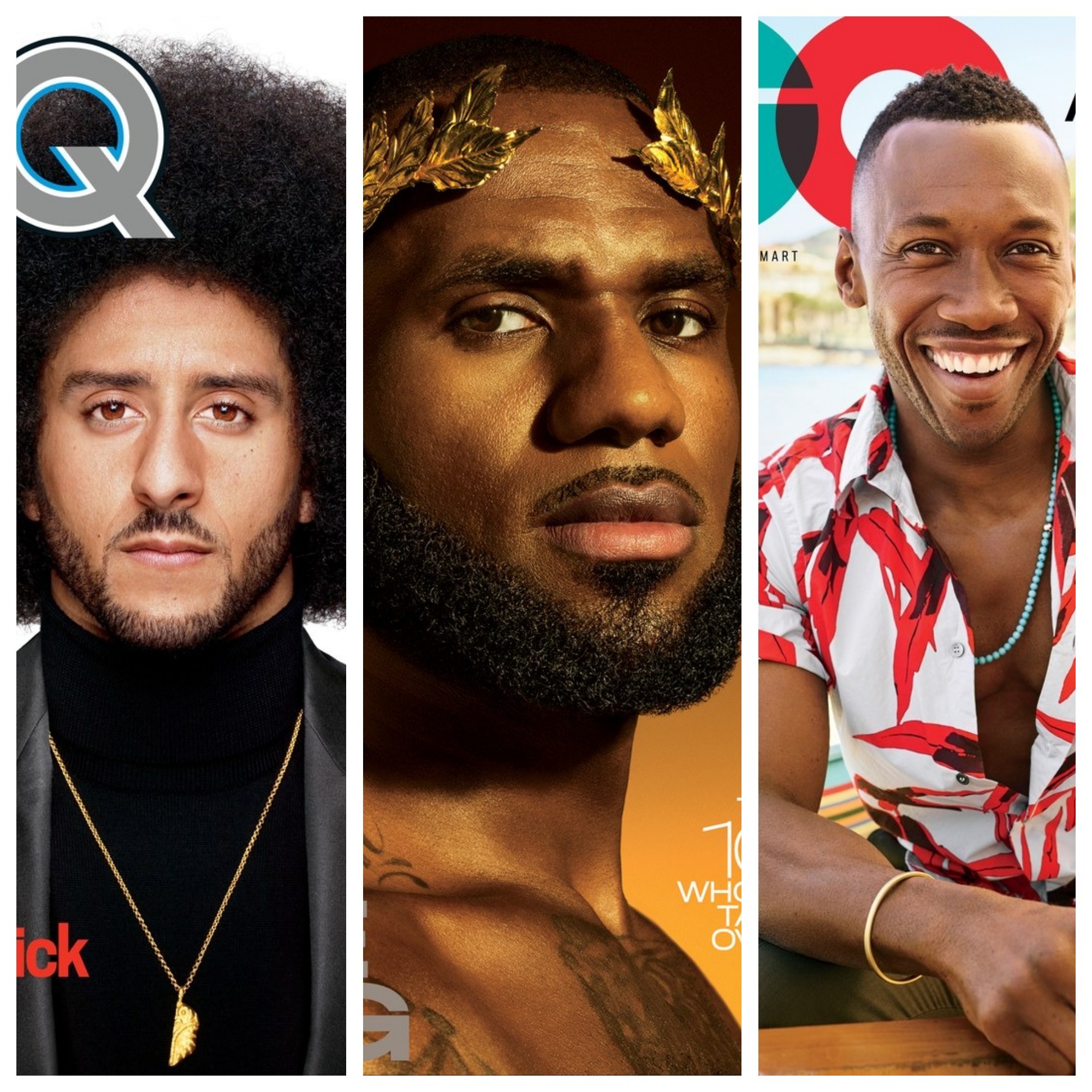 Serena Williams won the 2017 Australian Open and had a baby in the same fucking year! And like the goddess that she is, graced the cover of Vanity Fair in a stunning and tasteful pregnancy editorial shot by famed photographer Annie Leibowitz. Serena not only look beautiful, but she also looked like the power of motherhood. 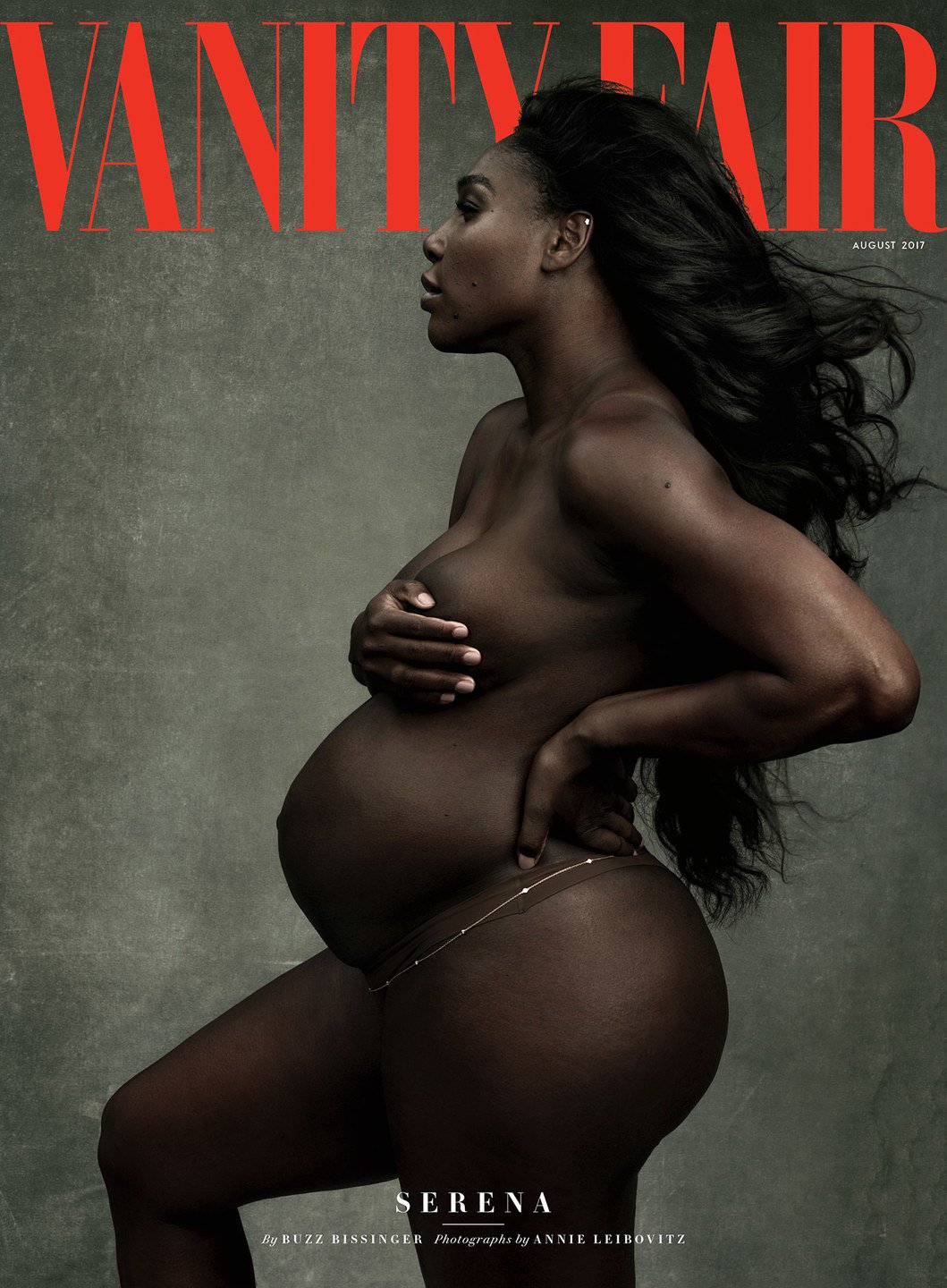 This year saw the changing of the guard at British Vogue. It’s former editor in chief Alexandra Shulman, claimed after she left the mag that she hadn’t read an issue of Vogue in years. Bitch Whet!? That was your literal job as the editor of a magazine! Anyways, her mediocrity was soon replaced by the talented Edward Enninful, the man behind W magazine’s best covers of the last decade.

Upon his appointment to heat of British Vogue, Enninful announced that there would be sweeping changes across the magazine in terms of diversity. He enlisted Naomi Campbell and Kate Moss as contributing editors, named famed black makeup artist Pat McGrath asBritish Vogue’s beauty editor, and Adwoa Aboah as his first issue’s cover girl. 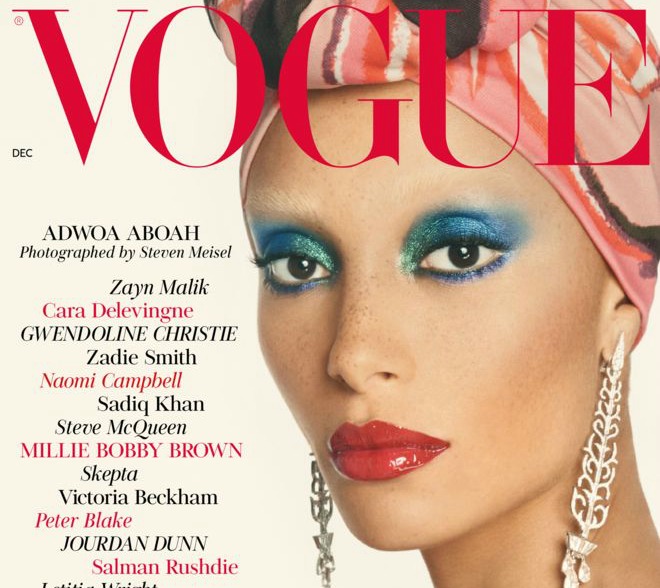 No one had a 2017 quite like Cardi B. Her single ‘Bodak Yellow’ became the first rap song by a female to hit the Billboard Charts at #1 since Lauryn Hill in 1999. Cardi’s quick rise from reality t.v wasteland ‘Love and Hip-Hop to legitimate recording artist, seemed to come out of nowhere. But she was the outspoken feminist of the show.  The L&HH audience watched as men frequently underestimated and disregarded her, only because they didn’t like her ‘Put Yourself First’ campaign. Unlike the rest of us, Cardi B seemed to have seen it coming from a mile away. That kind of confidence is what makes Cardi endearing. But her ‘quick to cut a nigga off’ bravado makes her especially lovable to women. Seeing Cardi make the cover of Rolling Stone magazine was a testament to any regular schmegular girl from the hood, that they too can make their dreams come true. 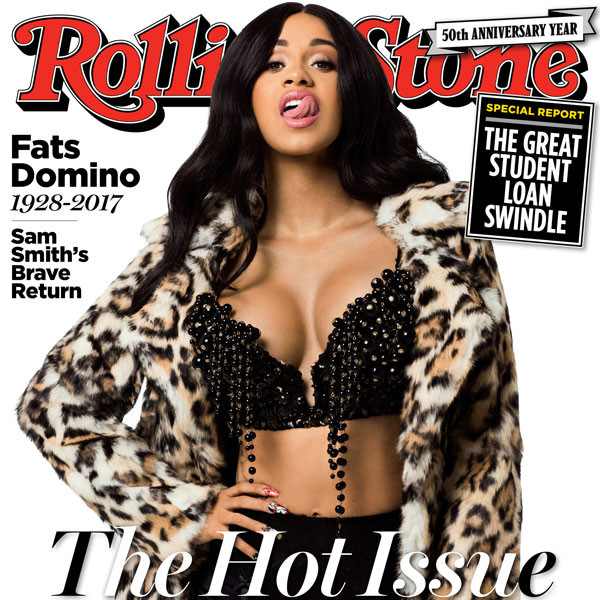 Two sisters, after coming off of major album releases in 2016, sat down this year for a chat to reflect on their childhood, careers, and motherhood. This year, Beyoncé Knowles  interviewed Solange Knowles in a feature that offered insight into the creative process of both women. In addition to the magnetic sisterly magic of the interview, the cover features Solange giving off major Diana Ross vibes. Her afro-textured hair pretty much took over the entire cover. Gorgeous! 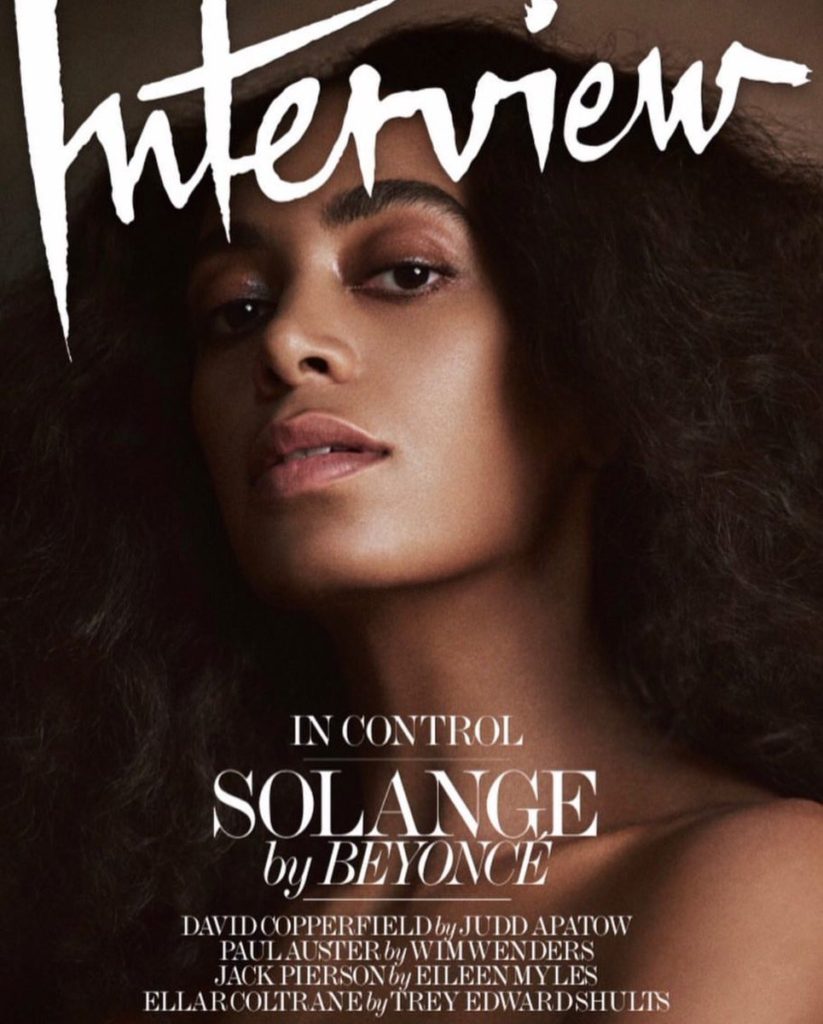 As the year wraps up and 2018 draws closer, at the very least we can all cherish the collectible covers of color that 2017 managed to bless us with.