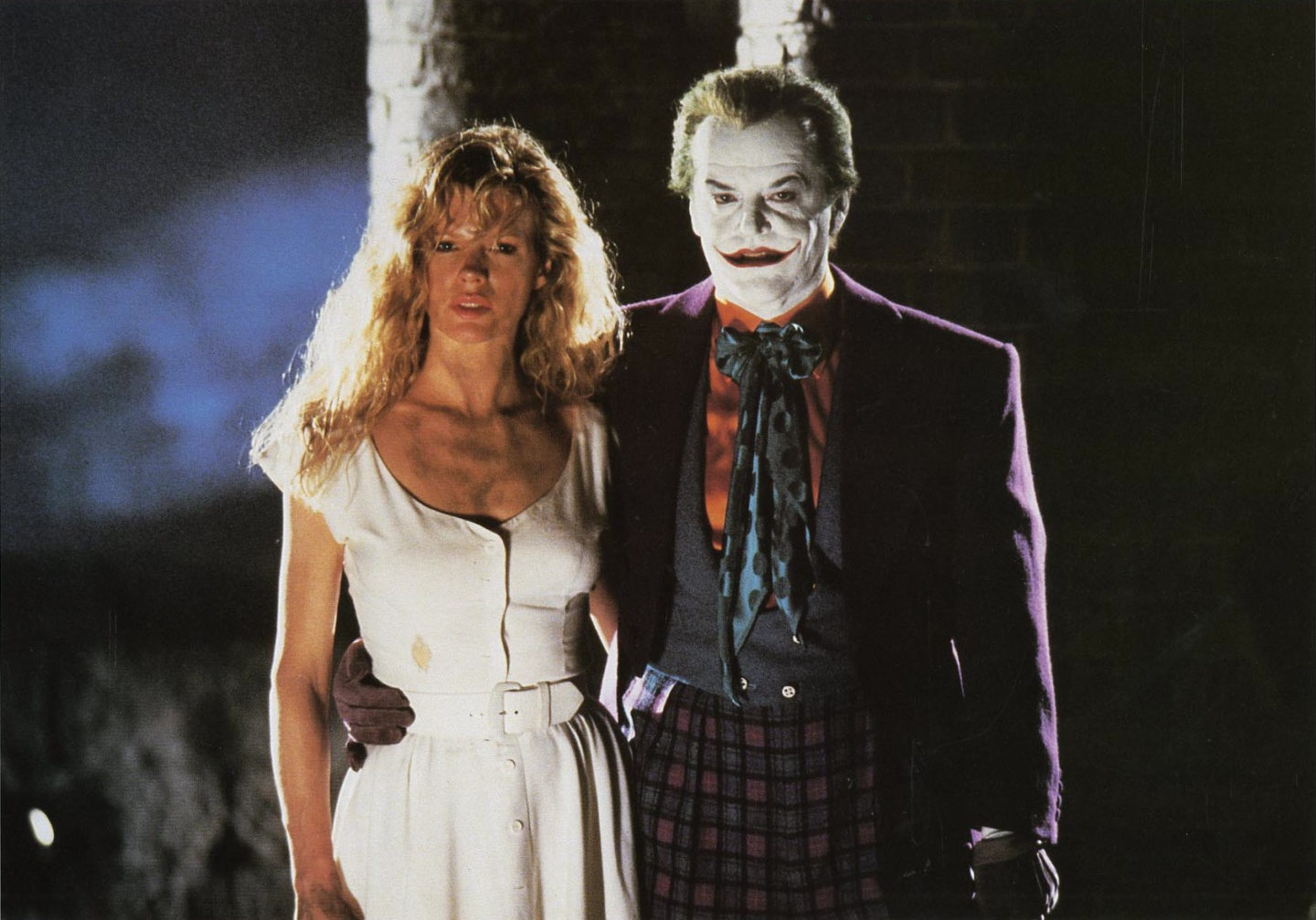 I want to talk about Kim Basinger’s role as Vicki Vale in the first Batman movie for a sec.

Batman, starring Michael Keaton as Bruce Wayne was released in 1989. It was the first major superhero feature film that setup the D.C/Marvel cinema landscape we know today. Batman wasn’t only good for a superhero movie, it had all the ingredients for a classic movie. It was directed by Tim Burton, featured a killer soundtrack scored by Danny Elfman with original songs by Prince. The movie made $411.3 million at the box office and is still considered one of the better Batman movies in the franchise.

Out of everything that makes the original 1989 Batman movie a classic, including Jack Nicholson as The Joker, the one thing that stuck with me the most was Kim Basinger’s wardrobe for her character Vicki Vale.

Vicki was fly as fuck and way ahead of her time. I see girls on Instagram in shit from Zara that try, but can’t come close to Vicki’s investigative journalist bad bitch aesthetic.

Vicki had looks. Okay? Like this one at her desk when she gets the news that there is a man on the loose dressed as a bat trying to solve crimes. Sleek ponytail, FENTY red lip, American Apparel dress and oversized glasses. A very downtown Gotham vibe. 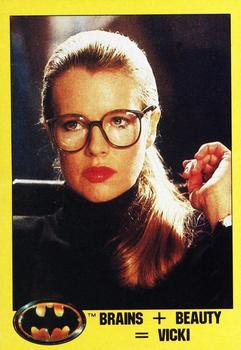 Vicki is super interested in getting to the bottom of this vigilante mystery and she really doesn’t have time for one of those lame introverted millionaire playboy nerd types with parent issues who keeps trying to get at her.

Bruce Wayne was really feelin’ Vicki and yeah he had money, but he also made her sit on the opposite side of his long ass dinner table during their date, so you know the sex was probably gonna be trash. But when you get invited to a party with lots of money floating around and opportunities to network, you come correct! Like this ‘Final Farewell to the 80’s’ ballgown that had Bruce Wayne and one of her co-workers foaming at the mouth and stumbling over their words. Yass Vicky! Make them eat it. 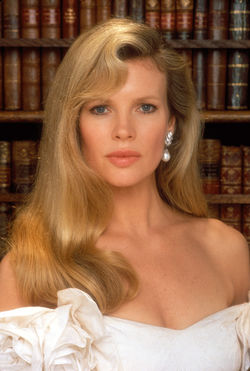 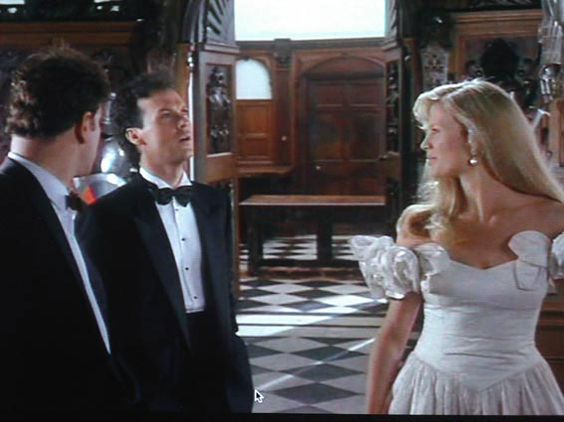 Or the time Vicky did an independent stakeout of a seedy crime-boss/rising politician. Yes, he wore crazy makeup and purple suits, but something else was up. There was something real fucked up about this Joker, and Vicky was going to get to the bottom of it….wearing a badass floor length black coat with a matching oversized beret. Lois Lane could never! 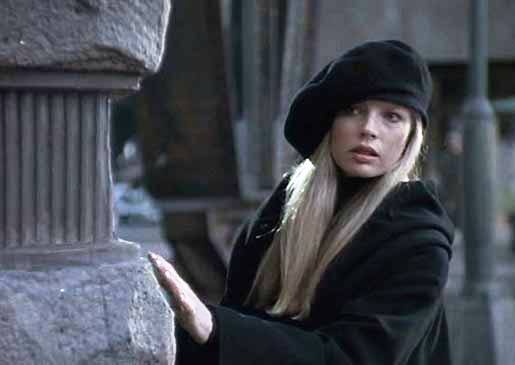 Of course she was right.
The Joker was a madman, who caught wind of her snooping and kidnapped her for a forced date at the art museum. I mean, it WAS a more exciting date than the dinner she had with Bruce Wayne. He even gifted her with a gas mask and gassed the entire wait staff to give her his undivided attention. He did a whole dance routine! That kind of attention on a first date is hard to come by these days. It’s still pretty gross and luckily Batman was able to save her in the end. But can we talk about this blue knit dress for a sec. It’s very Mara Hoffman esque, and is giving me damsel in distress realness. 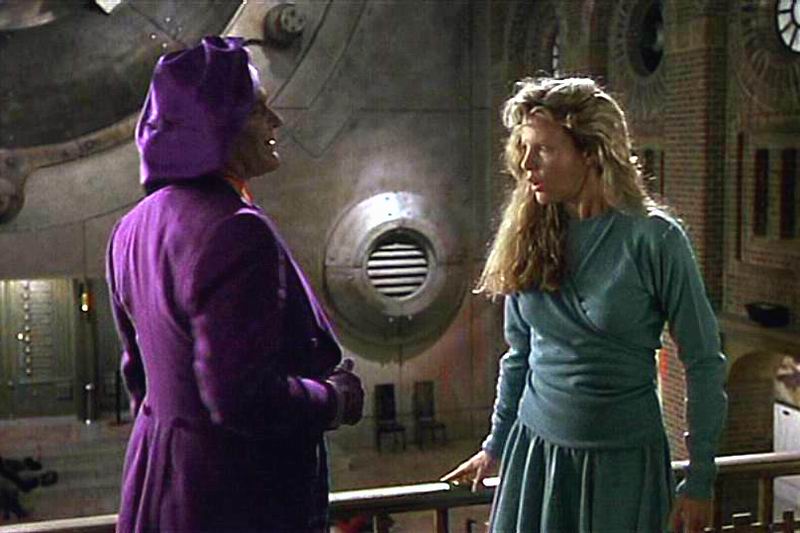 And who could forget the apartment scene?

A tender moment where Vicki confronts Bruce on how she’s trying to give him a chance but she can’t waste any more time on a lame. And understandably. This is the moment where Bruce tries to tell Vicki that he’s Batman, in a final flex to win her heart.

Shout out to Bruce Wayne in the three-piece suit and wool peacoat. It’s the first time in the movie he wears something outside of the Batsuit that actually fits. All that pouring is heart out with a G.Q steeze was about to work until joker came and fuck it all up. Vicki chose to go with a long sleeve, boatneck, LBD. Showing off Basinger’s long legs and black pumps. 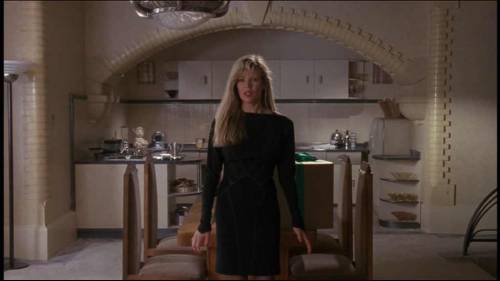 There are a few other stunning Vicki Vale outfits throughout the movie, which you should definitely re-watch.

In retro-spect, Vicki Vale was a pretty boring and forgettable character. It’s probably why they scrapped her in the sequel, Batman returns in favor of a more dynamic character like Selina Kyle. But there’s no denying that I would wear pretty much every outfit in this film.

Check out the original trailer for Batman (1989)