Tyren Redd is a photographer and Beauty Director who has worked with everyone from Brandy and Lil’Mama, to Chloe x Hallle. 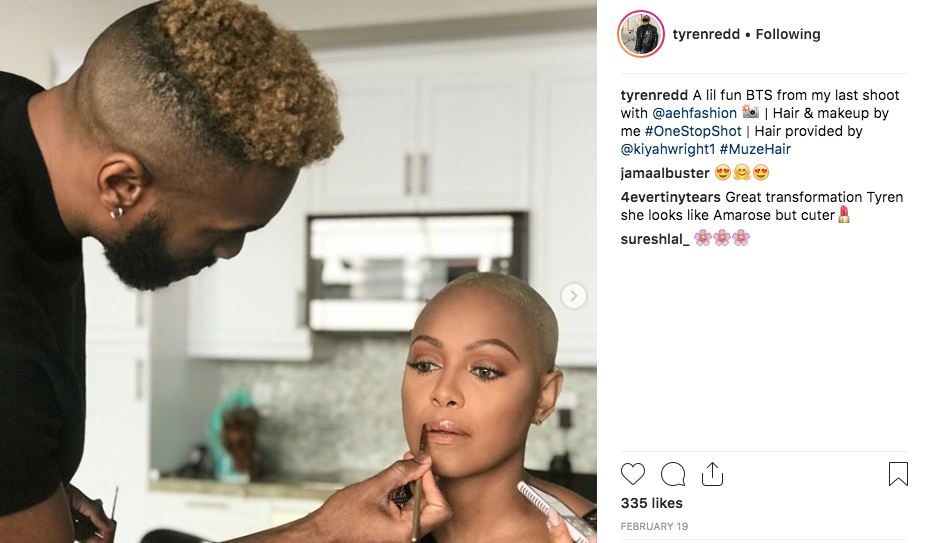 Lets not side-step the fact that he fine AF too!  I mean c’mon: 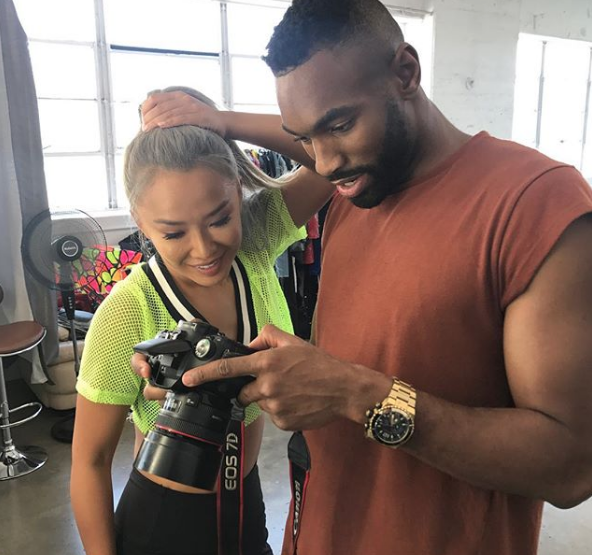 Tyren is also the genius behind the @beyoncedolllife Instagram page where he takes Beyoncé dolls and recreates the pop-stars most memorable makeup, hair, and fashion looks.

Not only are the looks iconic, but Tyren has an incredible eye for choosing the best angles from classic Beyoncé moments.

I spoke to Tyren about the inspiration behind his Beyoncé themed doll shoots, and what his creative process actually looks like:

So I’m going to assume you’re in the Beyhive.

TR: Yeah but more so, I just love greatness. Especially artists of color. I love when artists aren’t afraid to want to be the best. Beyonce is one of those people who are in line with the best. The Michael Jacksons and artists of that caliber. I’m just obsessed with greatness honestly. For me, I just found her to be so inspiring and I love creating in general. I’m a photographer first and Beyoncé is always doing these great concepts. I figured what better way to capsulize them, but in a smaller format. It actually started because I really wanted to shoot her. So for me, shooting the dolls was another way of doing it. It’s almost as much production. You have to think about the look, lighting the doll’s face, the makeup, the styling. It’s like doing a full production on a miniature scale. It takes awhile, but it’s always fun to see if I can do it.

TR: When I first created the doll I took a few snaps of her but I think the first full shoot was from one of the Lemonade era looks. It was from when she was on tour and I recreated a look that she performed in. I made the outfit. It was a leotard but it looked like a Michael Jackson outfit mixed with Beyoncé. It was like a hybrid leotard. So the first shoot was a touring look actually.
What was your thought process in deciding you wanted to do this. My dad always told me that if you want to do something, find a way to do it. That’s exactly what you did. You wanted to shoot Beyoncé and now you’re doing it in an out of the box way that brings people joy.

I don’t know if you’re dating anyone but were your close friends like “What ?”
TR: At first it was just kind of like a getaway thing. I didn’t really talk about it actually. My mom knew. I told her after I started doing it and she just thought it was so fun. My mom is very creative too and I didn’t realize how much until she started helping me out with the dolls. She’s retired and it became like a hobby for her. She started figuring out how to do the hair in different braids. She would teach me a couple things, honestly. I’m running around L.A and shooting a lot, so I do the doll shoots when I have time or if I’m immediately inspired by something. But my mom was kinda there from the beginning.
My two favorite Beyoncé reenactment photos are from the Hold Up and Don’t Hurt Yourself videos. They’re just perfect!

TR: I’m blanking right now but what’s the video I got that look from where she’s wearing all Black ans standing in between the two men in front of that house?
Formation?
TR: Yeah. That was a favorite one because she had so many looks in that video, but that shoot was also the one where I had to get a friend’s help. I was like “Hey I need you to hold this doll here.” and there were multiple dolls so I really needed help.[Laughs] 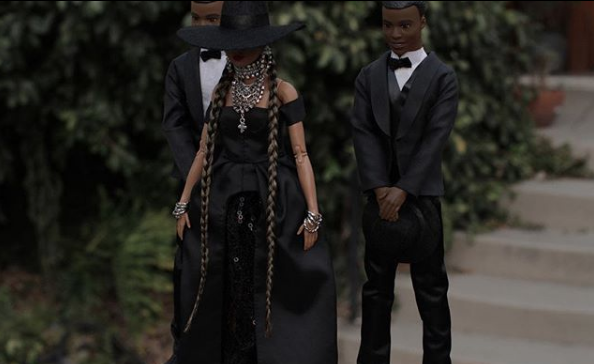 Its cool that you have a sense of humor about it. It’s like you acknowledge its a bit ridiculous but it turns out so dope in the end. So fuck it right?
TR: Yeah. Well you know the part that brings it all together? I really did want to shoot Beyoncé and I’m also one of those people who firmly believes that thoughts become things. For me it was fun and it was the challenge of how to make this doll really. I don’t know if you know this but she actually reposted a couple of the photos of the doll that I had done.
Oh Wow.
TR: Yeah. I think she reposted one of the one’s from the Hold Up video that you liked. It just made me feel like “Oh my God”, like I was that much closer.
I feel like there’s two things that make your photos so special. The first element being the fact that you recreate the clothing, and you recreate the hair and it’s so impressive. The second being the photography and the angles you choose to shoot. Like when you had that overhead shot of Bey and Blue at the VMA’s. It’s Genius! Is there any Beyoncé moment left that you feel like “I have to do that! I have to recreate that moment.”

TR: Well you know what. I think I want to go back…I was looking online recently and I know back in the day there were Destiny’s Child dolls that came out, but I didn’t really think they looked like Kelly and Michelle at all. So just to give you a heads up, I think I’m going to try and recreate a DC look at some point. That’s what I want to do. Like a whole moment.
Oh my God. This is a High.HowAreYou? exclusive!
TR: [Laughs.] I don’t know what moment though! I might need your help on that one, but I’m going to figure out one that everybody remembers. I want it to be super nostalgic.
The only one that jumps out at me right now is Bootylicious.
TR: [Screams]. Yes! There were some crazy looks in that video.
The yellow outfits with the feather in the hat!?

TR: Okay, now I’m gonna go back and look at every frame from that video because I remember there was a lot of pink too. And they had the Michael Jackson look with all the glitter! I loved it.

Be on the look out for more Beyoncé looks from Tyren @beyoncedolllife and check out his other photography projects here.