So there’s a general consensus that 2016 was a pretty terrible year. For some of us personally,
for some of us karmically, but 2016 was the year that seemed to drag on and on. 2016 brought
more bad news than good. This year we lost a lot of highly influential people.

Among the many other big names that died this year. We also endured one of the most painful election cycles I’ve ever bared witness to, which resulted in a the most vile, self interested person this country has ever seen in business let alone government running our country’s highest office.

After the Walter Scott verdict we are still having to cry out that Black Lives Matter. We also are watching a dearly beloved first family leave the white house after 8 years of getting to watch all four of them grow and flourish. It’s been tough. 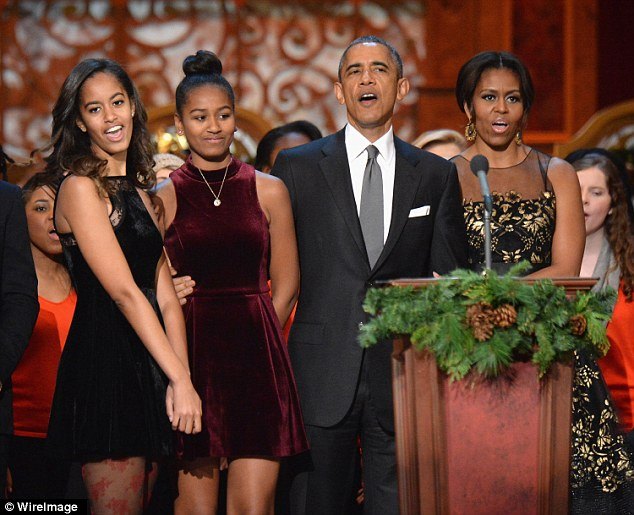 BUT… the one good thing to come out of 2016 is the insane amount of new music released from HUGE names. Beyonce, Rihanna, Drake, Kanye West, Alicia Keys, Common, The RollingStones, David Bowie, Frank Ocean, Lady Gaga, De La Soul, Brian Eno, Mavis Staples, All of which were highly anticipated and critically acclaimed releases. There were also some albums that came out this year from lesser known artists that still had a huge cultural impact. 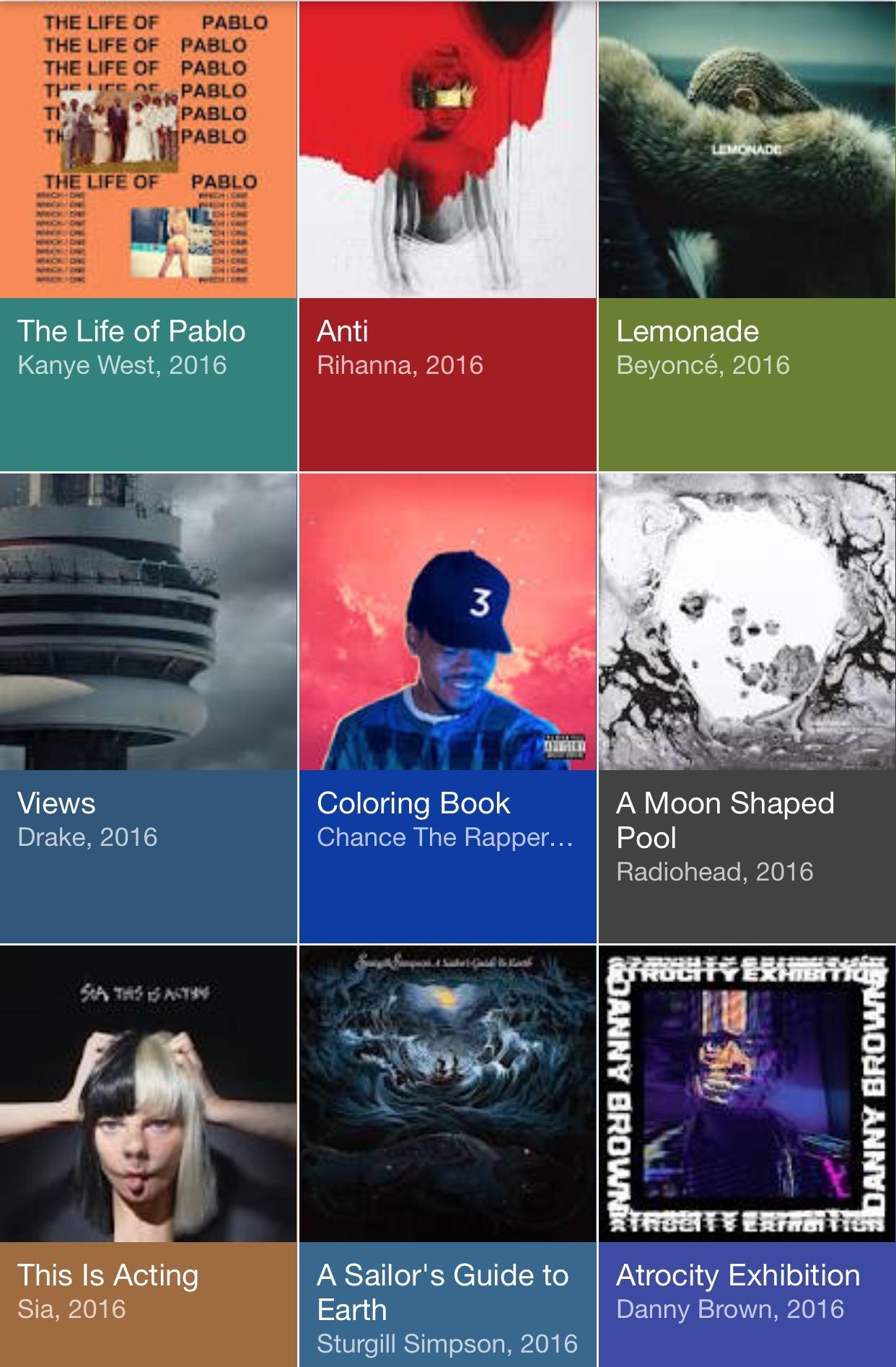 So here’s my list of the top music moments of 2016. Let’s at least acknowledge 2016
did have its highlights!
——————————————————————————————————————————-
–
David Bowie’s Goodbye
David Bowie released his album Blackstar featuring the single of the same name on January 8th. On January 10th, only two days later, Bowie died after a long and secretive battle with cancer. Bowie, like the true genius he is, gift wrapped his 54 year career with 8 tracks, presented it to the world, then bowed out gracefully from a world he impacted so much. Bowie pushed boundaries, genres and gender until his last breath and from him we could all take a lesson in being more poetic, and less public.

Solange Knowles on SNL
Solange Knowles is an artist, fashionista, socialite, musician and sister of a singer who you may have heard of who we will mention later. But Solange is a star in her own right. The singer released her third album ‘ A Seat At the Table ‘ on September 30th and it quickly shot to the number #1 spot on the Billboard charts. The theme of the album largely centers around Black femininity and the black American experience. The beautiful thing about this album is even if you can’t speak to those experiences you can enjoy the rich composition, layers and soundscape this body of work offers AND also learn a thing or two about black femininity and the black experience as Solange sees it. On November 5th Solange appeared on SNL and performed the song we’re listening to right now, “Cranes in The Sky’ looking like a young Diana Ross/Ciscely Tyson lovechild with a sparkly braided halo. She sounded and looked amazing. It may seem too soon, but I’m going to go ahead and say her appearance on SNL is one of many iconic performances we’re going to see from her in the future. 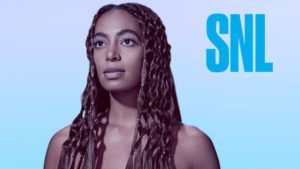 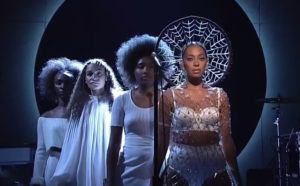 This Thanksgiving the internet unearthed a treasure from gospel great Shirley Ceasar, remixed it, and the #Unameitchallenge was born. The original song is “Hold My Mule” which is a gospel about a man named “Shouting John” who is so filled with the holy spirit that he can’t contain himself in church. Let’s listen to a little of Shirley Ceasar telling the story of shouting John. So a genius who goes by the handle @remixgodsuede found this 10 min. Clip from 2010 and sampled that one part about “Shouting John’s” crops and now we have the “family-get-together” theme song for 2016. This remix went viral and had people all over the internet making showing off their own Unameitchllenge moves. Who doesn’t love dancing and food? Also it gave a push in popularity to Shirley Ceasar who was already a legend when the song took off. Because of the remix the song shot to the #2 spot of the Billboard gospel charts.

Earlier I mentioned the huge artists in 2016 who had highly anticipated releases. Well, none was more highly anticipated and surprising than the new A Tribe Called Quest album “We Got It From Here- Thank You For Your Service”. Highly anticipated because their last album was released in 1998 and surprising because hardly anyone knew they were working on new material, or that we would get it this year. The album’s release in November is also significant in the fact that it came mere months after the death of one of the group’s biggest stars, Phife Dawg, who died of diabetes related illness. Phife is all over the album though, and despite his health he is in tip-top lyrical shape as you can see on
the album’s standout track “Solid Wall of Sound”. 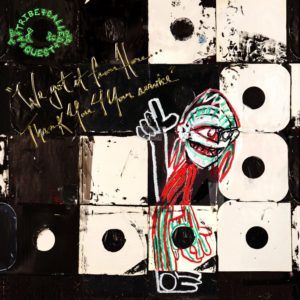 Despite the year most of us had actor/ Musician Donald Glover had a pretty epic 2016. First, with the release of his hit show on FX “Atlanta” which was a funny, smart and refreshing look at the hip-hop scene and life as a local celebrity. Atlanta is hilarious and was one of the rare tv shows that I actually watched in real time. A lot of people obviously felt the same way because not only did the show garner high ratings but it was picked up for a second season after airing only two episodes of this season. On top of having a hit tv show, Donald Glover released a psychedelic funk rock effort under his alter ego Childish Gambino called “Awaken My Love” that is reminiscent of Funkadelic, Sly and The Family Stone,CAN, and Tame Impala. I actually can’t believe he made this album. Childish Gambino is mostly
known as a rapper, a good rapper, but rapper none the less, this album is.. Different. It’s so soulful, and so funky that Questlove from The Roots called D’Angelo at 4:00 in the morning to tell him how good it was. To all you non-music heads out there, it’s the equivalent of Quincy Jones calling John Lennon in the middle of the night because it just can’t wait. That’s how good this album is.

Beyonce at the SuperBowl

Last but not least, arguably the greatest living entertainer of our time, Solange’s sister, Beyonce. Two days following the sudden death of Prince, Beyonce released her sixth studio album, “Lemonade”. To date, “Lemonade” is Queen B’s sixth
consecutive #1 album which has sold over a million copies. Lemonade has nine Grammy nominations in various genres making Beyonce the only artist to be nominated in the Pop, R&B, Rock and Album of the Year categories in the same year. Beyonce and her sister Solange are one of only 3 pairs of siblings to chart #1 albums, the others being Michael & Janet Jackson, and Master P and Silkk The Shocker. She performed songs from the hit LP at The BET Awards,
The MTV VMA awards, Even the Country Music Awards which had many conservative’s really seeing red, but nothing riled them up more then her show stopping performance at the SuperBowl with Bruno Mars and Coldplay. It happens to be my favorite music moment of 2016. Complete with Black Panther regale, exposed brown thigh’s, and perfectly sculpted afro’s. Beyonce’s performance of her hit single “Formation” was probably the blackest thing I’ve ever seen on primetime television in my entire life and at The Super Bowl no -less. The most watched television event of the year and Beyonce and her team of sistah’s killed that dance routine while Bey hit every single note and step. It was beautiful, amazing, and worth every police sanctioned “Beyonce Boycott” that followed. So as 2016 comes to a close, I hope that a Trump presidency at least yields good protest art.