Released during that sweet time of year right before the NBA Playoffs and March Madness, 2Chainz’ 5th studio album ‘Rap or Go To The League’ has been a classic hip-hop album in a landscape of forgettable releases. 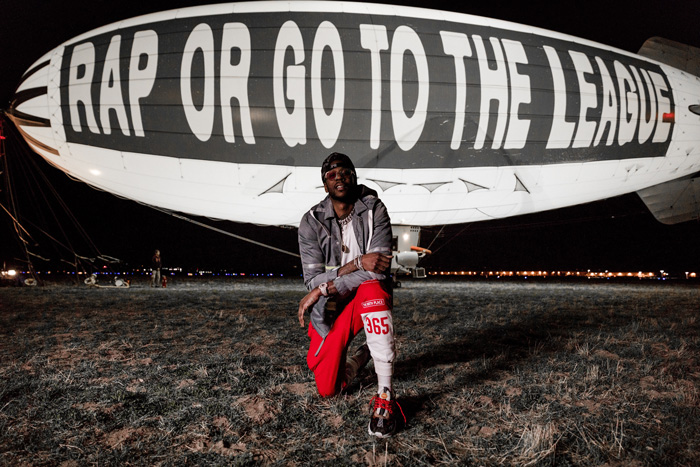 The Atlanta rapper’s highly awaited follow up to 2017’s ‘Pretty Girls Like Trap Music‘ has 14 tracks and LeBron James as Executive Producer. Rap or Go To The League is also the first music he’s released since marrying his longtime sweetheart and mother of his three kids, Kesha Ward. 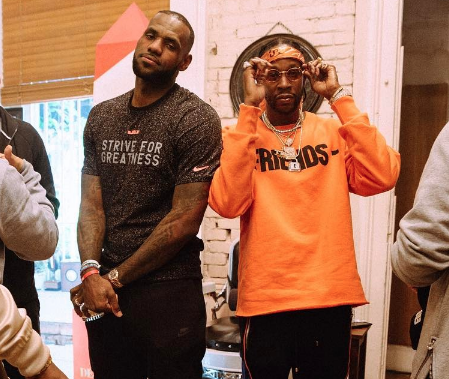 Coming from the man who made Pussy Rehab (a sonic gem tbh), the artist formerly known as Tity Boi’s new material shows maturity, humility, and an introspective analysis of his life up until now.

Rap or Go To The League is an album that has an appropriate amount of features. The low amount of guest verses leaves enough room for 2Chainz to really do his thing. I was shocked that there were no features with longtime collaborators Drake or Gucci Mane, but the choice to have Ariana Grande, Marsha Ambrosius, Kendrick Lamar, and E40 just goes to show that this is a man who lives for the unexpected.

Also, now that LeBron James has set the bar of non-music niggas EP-ing albums, Executive Producing a 2Chainz album is now on my bucket list!

The album starts with a throwback announcement of a basketball starting line up with Tauheed Epps, 2Chainz government name, being called first. The audio clip is from when Chainz played ball in high school and the song continues with him retrospectively talking about his biggest life lessons and losses.  From catching his first case to watching a close friend lose a child, Forgiven serves as a sort of confessional to get all past grievances out the way before he can move on to be the man he’s destined to be.

It took two songs for me to realize that 2Chainz is trying to prove a point with this album, with one of those points being that he can murder more than just trap beats. Another point being that he’s tired of not getting the credit he deserves after being in the rap game for over a decade. Between changing his entire brand and being a favorite on features, Threat To Society is 2Chainz coming at you personally to collect his things. The beat is a hot sped up soul sample of The Truthette’s ‘So Good To Be Here’ produced by 9th Wonder, with the lyrics “It’s so good to be here. It’s so good just to be alive” Yes, it is!

Money In The Way

Money In The Way was produced by duo Jabz and Buddah Bless. Although I’ve heard Jabz’ productions on a few Migos and Travis Scott tracks before, and Buddah’s four credits on Pretty Girls Like Trap Music, this is the type of song that really puts a producer on the map. The horns, the build up, that thump! This song just makes you feel like you just won some shit, or you’re bout to.

It wouldn’t be a 2Chainz record without trappin’ and if you’re going to reflect on your life, you gotta put it all in. The good and the bad. Some people commonly mistake these types of songs as glorifying drug sales. I think that’s a very narrow minded way of thinking.

Look at it this way, if you’re going to do something and commit to it then you should try to do your best every time. I used to shoplift from H&M and at one point I was able to swipe a whole club outfit with ease! Was it wrong? Yes. Am I proud of it? I mean a little…It was a skill set I developed and at one point I got pretty good at it. That doesn’t mean that I condone or support that kind of behavior now. I believe the same goes for rappers. Also, Statute of Limitations has those murky piano notes that remind you of a horror movie and the lyrics are truly tales from the trap.

When you think of 2Chainz it’s usually hilarious, yet cold bars and high fashion drip. High Top Versace is an ode to driving Rolls Royce trucks and having Donatella Versace on speed dial. That’s pretty much it. Young Thug is on it and stays true to his brand of making no sense. I think I’m still just bitter that Young Thug ended up having more staying power than Fetty Wap because at least he made sense.

Produced by Mike Dean and Wondagurl, Whip lets Travis Scott shine without getting in the way of the 2Chainz verses that we came for.  This is definitely the song off the album that’s gonna go up in the strip clubs in AT-lanuh. I can just hear the ass clappin now.

This song is probably banging in every college basketball locker room as we speak because it is one of the only songs to our knowledge that addresses both being a superstar in the NCAA, and feeling cheated by the same force that is propelling your career. 2Chainz also managed to randomly scream “I’m playing with a clit like a guitar!” and then transition into a fire guitar solo. His mind! What genius!

With Pharrell on the beat and another insane K.Dot feature, how can it not be. This song is simply not long enough. So much so that it took a while to finish the second half of the album due to replaying Momma I Hit A Lick 12 times consecutively. It’s just so good.  The kind of beat and verses that screw your face up the entire track.

Ariana Grande killed this hook on Rule The World. It reminded me of throwback 90’s R&B hip-hop collabs, and is one of the only songs in recent memory where Ponytail actually sounds like she’s singing from her diaphragm for a change.

Paul Cabbin, Hitmaka, Cardiak and Rob Holladay put together this beat that is so luxurious, it really could have benefitted from having a Rick Ross cameo.

Gun to my head, I could not tell you any Ty Dolla Sign song titles, nor can I say with certainty if he is a rapper or a singer. Regardless of my complete ignorance on Ty Dolla Sign’s artistry, he does add a lot to this song even if it’s just in the chorus. I love his tone and getting 2Chainz to sing a lil bit was a nice touch. If I had to pick a mainstream song that could get Top 40 rotation, this track would be it.

SECOND. BEST. SONG. ON. THE. ALBUM

Lil Wayne is truly a treasure and he really did what he needed to do on this DJ Mustard beat. I seriously can’t wait to go stupid to this song in the club. E-40 was cool addition as the beat does have a West Coast vibe, but the only E-40 verse that has been memorable in recent memory is his verse on Yo Gotti’s Law. This song  is where I would have liked to have seen Drake.

Can someone please explain the recent trend of putting These Are A Few Of My Favorite Things in songs. The only time I’ve heard it work is when Outkast did it, so hearing it sped up at the beginning of this song for like 15 seconds is 15 seconds too long. I’m glad I stuck with it though because I love it’s use of Lonnie Liston Smith’s ‘Garden of Peace’ which is a song that has been sampled so much in Hip-Hop and R&B. Also, the chorus goes so hard and its perfect for making up your own lyrics.

They asked what a muthafuckin’ blunt hitter was/ I said me.

And lastly there’s Sam. Just in case there is an IRS auditor out there somewhere bumping Rap of Go To The League in their Toyota Corolla, 2Chainz waited to the last song to tell them niggas he has had it with paying taxes! Accusing Uncle Sam of taking grams out the bag is a little ridiculous, because it’s literally what taxes are. Unlike a drug dealer skimming off your bag, it’s not cheating it’s just the law and clearly as all the previous songs before this one show, you’re not strapped for cash 2Chainz.

He does address his grievances with where tax money is allocated and distributed, which is the better argument.

He’s right when he says See, the education levels ’round here don’t exist /Taxes pay 12 but don’t pay ’em to kill the kids .

TRUE! but when your’e on the broke side of things and here songs like this it just makes you wonder if taxes were going to infrastructure, education, and community development and not military and over policing communities, would 2Chainz still have an issue with the government taking 37%? The monologue at the end of this song has me thinking that answer might be yes.

You was led astray, I’m ’bout to set the pace/ I think I’m booked up, but let me check the date (Let me check)/ Watch my footsteps, yeah, ankle weights (Big)/ Bought a new scale, tryna calibrate/ Tryna add it up, I’m tryna allocate/ Rockin’ reptile, talkin’ alligate’   – Money In The Way

I’m a beast, I’m a dog, I ain’t takin’ no days off/ All them cloudy ass diamonds got your necklace look like fog/ On the phone with Donatella, I need my high tops in yellow/ Name another fella got Versace deal that’s from the ghetto – High Top Versace

Is you finer than Fashion Nova? I wanna really see what’s in them jeans/
Is that a lace front real hair extension, or it’s just a quick weave?  – Whip (Shouts out to men who know about quick weaves)

This shit here gettin’ deep, yeah, yeah/ I got the pool right by the beach, yeah, yeah
My nigga said, “Fool, that’s the ocean,” yeah/ I use good pussy like it’s lotion, yeah, uh – NCAA

Fuck a piece, I want the whole pie graph (Yeah)/ Money taller than a giraffe (Tall)
Feng shui by the mic stand/ Have you ever had two one-night stands? (Have you ever?)
I’m a emperor, very sinister/ Somewhere smokin’ on indica (Mmm)/ Fox on me like Vivica (Mmm)
I pray for before meals, spiritual – Momma, I Hit A Lick

And I live the boss life, you can tell/ Bracelet on frostbite, heavy metal/ I ain’t giving up, no way
I’m too good if you ain’t got me ranked
I’m too good; I’m beyond outer space
I’m too good to be in line at the bank – Girl’s Best Friend

Spit cold shit, need Mucinex/ Diamond chain ’round my neck with the crucifix
Got a family now so I gotta pipe down/ ‘Fore a young ho fuck up my timeline – 2 Dollar Bill
Trap check, check, one two/ She wanna split, dip, fondue
Shinin’, I’m in the sunroom/ Life a bitch so you better use a condom – 2 Dollar Bill

Buy and stream your copy of ‘Rap or Go To The League’ at Apple Music, Spotify, or Google Play now!